Wow, long time no post! I plan to get a couple of posts in here over the next few days ... some good stories to tell.

First, about our last unit. Our pace lately has been 1 unit a month, towards the end of the month. The best auctions in our area are all clustered at month's end, so I make sure to get them on my schedule. We'd go more often, but frankly have run out of space for storing stuff so until we can move out some of the goods, we've got little space for new finds.

On September 23rd, there was the usual series of auctions for the day, with a new one added on at 8:30 in the small city of Marlboro, about 20 minutes from my house. I believe there were 14 units up for sale. My brother met me there. The first unit was "tossed," meaning it was clear the owner of the unit had come in, taken what he valued, and left the rest to be taken care of by someone else. There were lots of opened boxes in the front, tossed around, half empty or completely empty. A pass. I think it went for $50. The first unit we saw that was interesting had a washer/dryer combo, refrigerator, boxes and two tool holders like you see mechanics with at garages. It ended up going for about $100 more than our limit. So, we kept on going. Most of the units were being bought by a woman who I recalled chatting up about 6 months at another auction. She owns a second hand store in Rhode Island, so she was here picking up goods for the store.

Eventually, we came to a unit that was about 10 X 10 and pretty filled. I saw some furniture in the back that was interesting and a reel-to-reel tape deck and wanted it. I have fallen in love with older stereo equipment following the set of 1960 tube pieces we found a few units ago. My brother and I agreed on a limit and I only went $75 over that limit in order to get it. Here's what it looked like before we really got into the "dig," 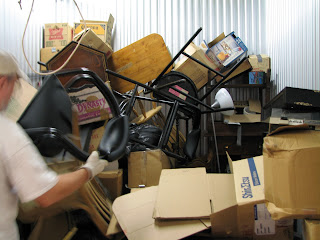 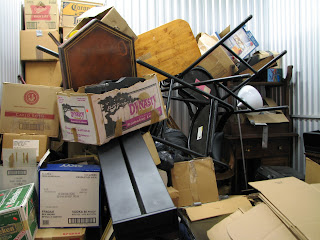 After buying this unit, we went on to the next auction and didn't buy anything. We skipped the rest because each had only 1 or 2 units up for sale and we thought our time would be better spent cleaning this unit out.

The boxes in this unit mostly contained records (as in 12" LPs) or papers. I've gone through just about every box and am amazed at the sheer magnitude of unpaid bills a family can accumulate. At the bottom of one box, I found a gold bracelet! That, and a few small boxes of other gold jewelry I found in another box comprise the first gold we've ever found in a unit. Woo hoo! The gold will more than pay for the unit, so everything else is profit.

And the everything else is turning out to be interesting. We found an old 44-key keyboard that we thought wouldn't have any value because it was clearly so old. Turns out it's from 1979 and is actually desirable and going for $300 - $500 on eBay. The tape deck is worth about $100. There's also a double cassette deck machine and a direct drive turntable. Some clothes can go into our booth for small dollars, primarily to pay the rent. The records are probably worth $1-$2 a piece and we have over 300. Yesterday, I found a kitschy 1950's green ceramic panther with a light bulb in the back. These used to sit on top of old-style console tv's, I believe. Should pull in some decent money as well.

There's also a steam cleaner, a weight bench and some other random stuff. Oddly, the furniture I was interested in that prompted me to buy the unit was all pretty junky and we took all off to the dump. I think the only pieces of furniture we saved were a few occasional tables (including the leather-topped one you can see at the top of the pile in a photo) and a bookcase that needs to be reglued before selling. (Bookcases seem always to sell.)

When cleaning out the boxes, I started looking through some of the correspondence I found. Primarily, I hoped a birthday card might contain a forgotten-about gift card or money. And, what I read prompted me to read more. I found quite a soap opera in the papers. The center of all the drama was a woman I'll call Susan.

Susan had previously divorced a husband and had a daughter from that relationship. She was now living with a guy named Joe. I found lots of short, hand-written notes from Joe to Sue exclaiming how much he loved her. One sad note said he was in jail and he was writing, pleading with her to come and bail him out. He said he loved her but all she loved was the pipe.

Sue herself had plenty of contact with the police. We found some id's for her indicating she was a member of the Las Vegas police in the 80s. Then I found what I can only describe as a rap sheet, listing her many run-ins with the local law enforcement. DUI, assault with a deadly weapon, assault on a police officer, a good 10 or 12 arrests over the years. Yikes!

Further on in my box review, I found a number of condolence cards to Susan following Joe's death. Then, I found a marriage certificate documenting a 2006 marriage between Susan and another woman, Linda. In the same bunch of documents, I found 2 letters from Linda to Susan professing her love and wondering why Susan didn't love her.

Finally, and this really bothered me, I found correspondence between Susan and a law office. Susan had used a lawyer to recover a $640 debt her daughter owed her! There were a number of letters from the law office passing on $40 weekly checks from the daughter to repay the debt. Honestly, who does this kind of thing to her own daughter?

So that's the story of unit #17. I suppose Susan didn't value any of these papers. Why else would she have left them to molder in a storage locker she didn't even bother to keep current on?
Posted by Cranky at 6:16 AM

Email ThisBlogThis!Share to TwitterShare to FacebookShare to Pinterest
Labels: Purchases

Cranky
Retired, early 60s, caregiver to my wonderful wife who has multiple sclerosis and to 2 dogs - Addy and Dakini.